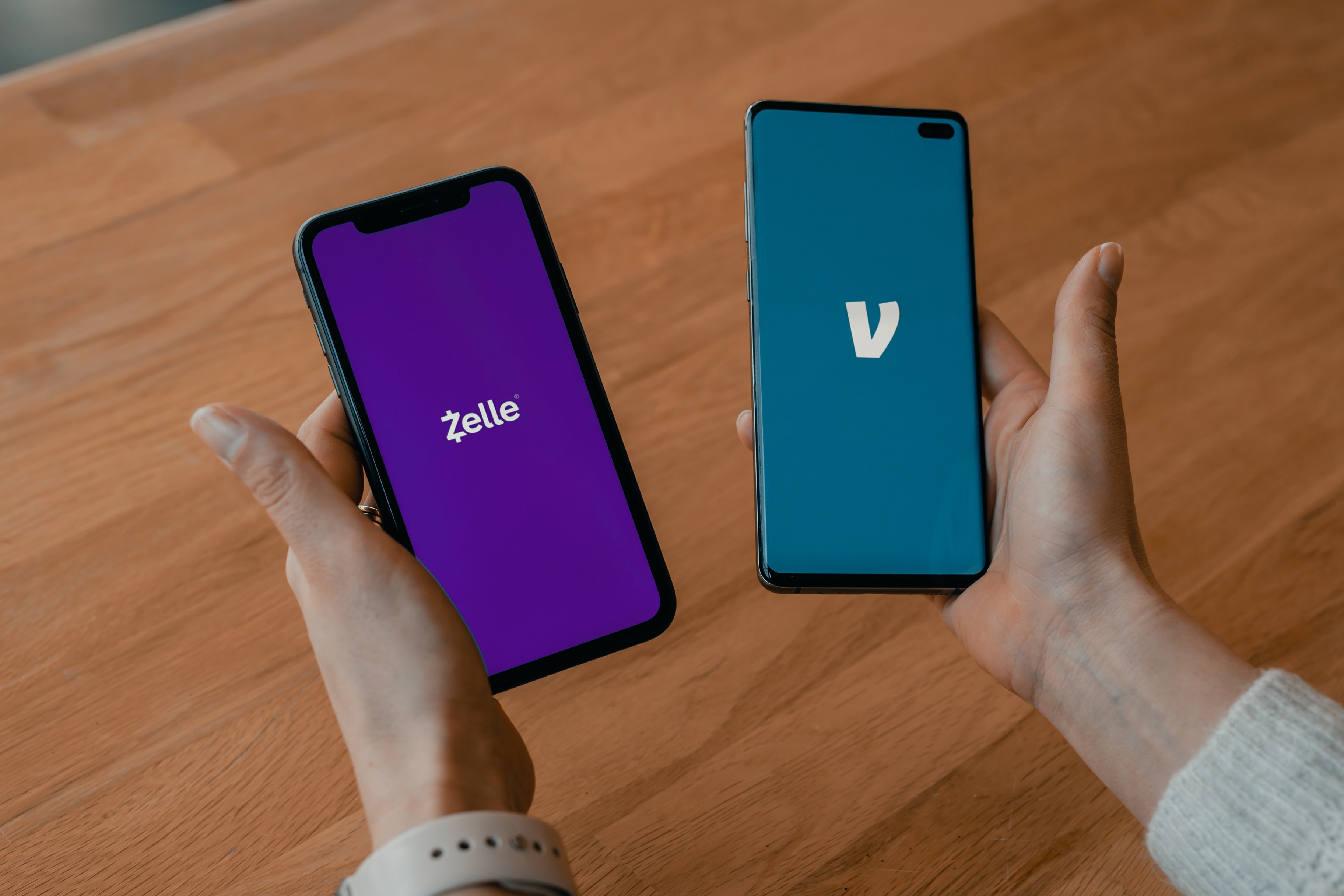 Venmo is a social, mobile app that connects to your cards or bank account that enables sending money easily among other users like friends, family and roommates. Venmo wants to make their app even more convenient by adding a scheduled payment feature directly into the app so there is no need to set a reminder on your calendar to pay your phone bill or rent – set the date and it’ll do the rest.

With a predetermined feature, most of the time was spent on competitive research, ideation and prototyping and less in the define phase. The goal of the project was mostly to learn how to design within already set design standard. 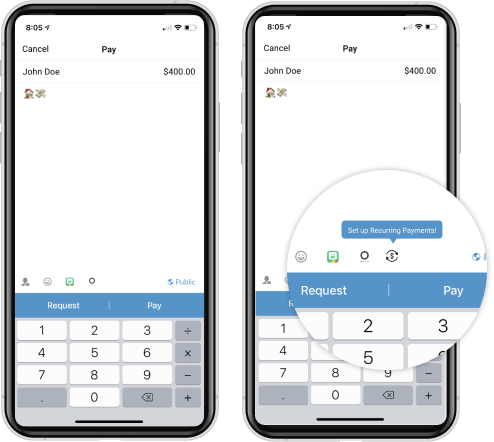 How are people currently dealing with reccuring payments?

We started this project by writing down our initial assumptions. Who do we think will benefit the most from this feature? Who is our target user? I then began to research the direct and indirect ways people pay or remember to pay their recurring bills. There are so many methods to pay your recurring bills, so why would someone want to chose Venmo over these other competitors? 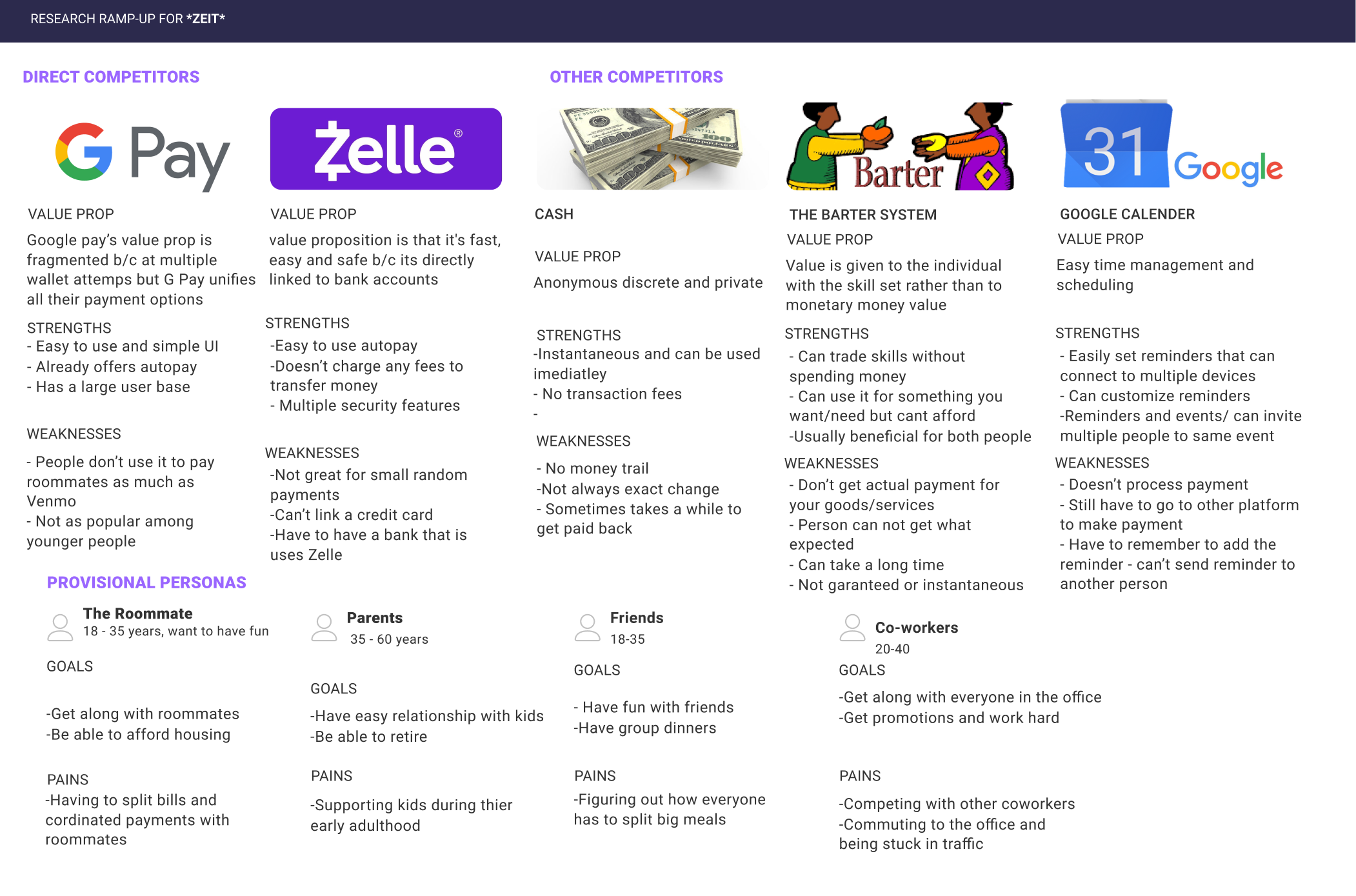 Understanding the users & their frustrations

My focus was primarily  on the 'roommate' persona, James. I felt he represented the largest group of Venmo users. James' main use of Venmo is to pay his friends for their shared recurring bills.

James Flynn
“I live with 3 roommates and we each have different bills in our names, sometimes I forget to pay them for utilities or rent, it can be really annoying”
Define

Using the job-to-be-done framework, we can discover the different jobs our persona, James, might hire from Venmo. The minimum job is the ability to easily pay others for shared recurring payments. Using the Job-to-be-done pyramid we were able to organize the different jobs in varying levels of priority and what features are necessary for each pyramid level.

I conducted a survey and user interviews to understand how people deal with recurring bills. The results gave me insight into peoples spending habits and their frustrations.

• It is hard to remember & pay bills on time without the help of an outside source (calendar, text, reminders etc) 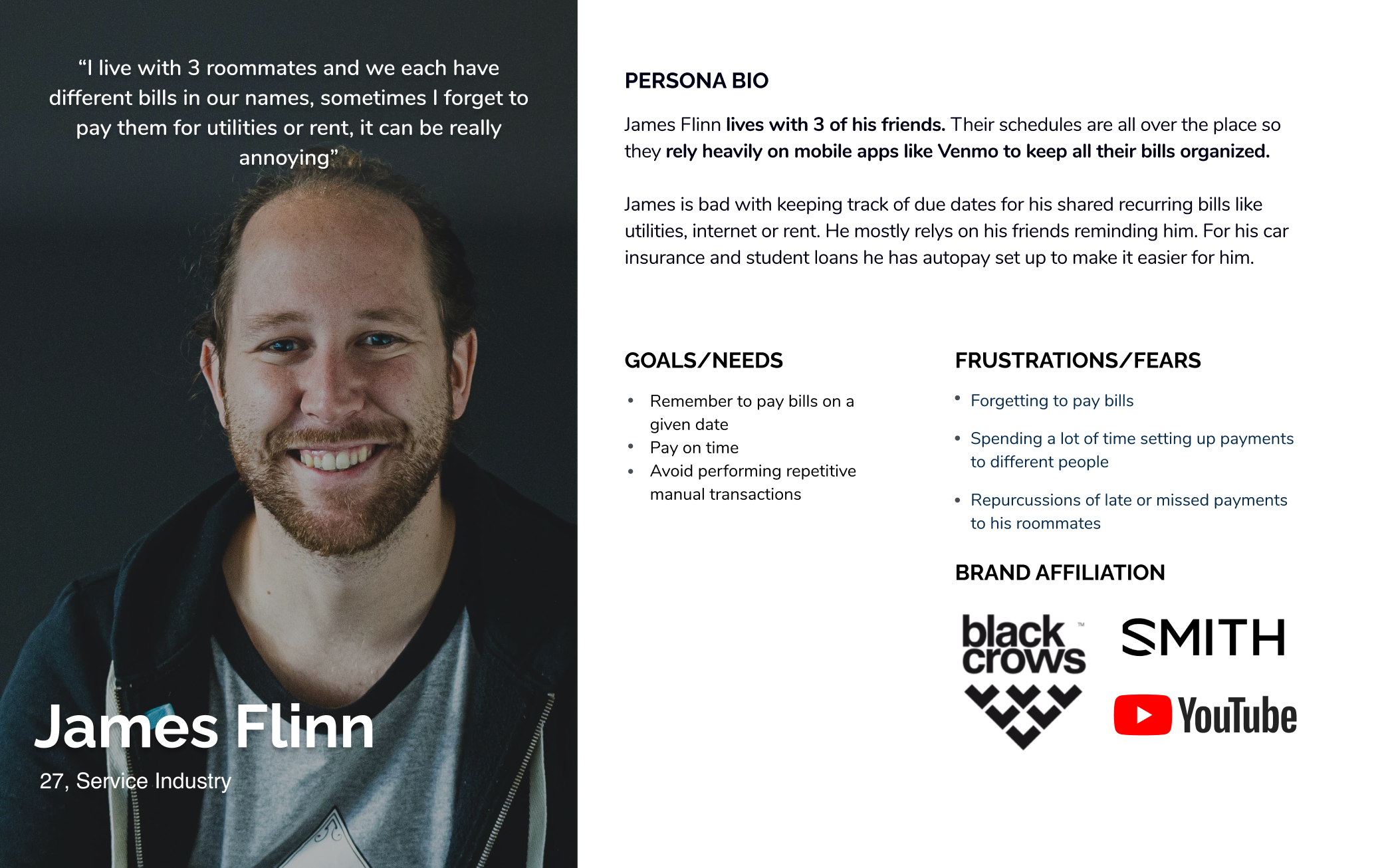 I found that people use Venmo over other peer to peer payment platforms because of its ease of use. That was important to think about when iterating. How can I make it so a person can set up this feature as quickly and easily as possible? After many iterations I found that minimizing the steps and variables was important for staying within the Venmo design standards along with using a half pop-up to make the features seem less invasive 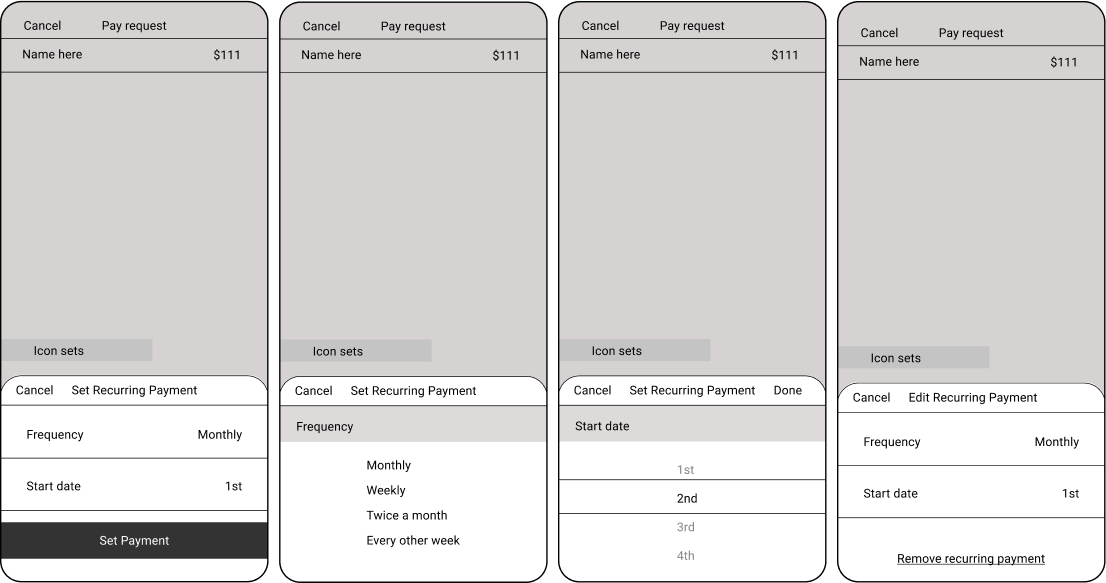 • People found the feature to fit within the current Venmo design standards
‍
• All users were able to set up a recurring payment with ease
‍
• People felt that there needs to be additional notifications once payment was set up. One that confirms recurring payment setup and one before payment is withdrawn

How the Recurring Pay feature works

I found that creating realistic deadlines for myself was extremely important in moving forward with the project. I tend to get wrapped up in each step and seeing the deadlines helped me get out of my head and see the bigger picture

I spent a lot of time trying to design this feature with too many steps and options. In the end I found that limiting it to just two variables made the flow easier to follow. For the MVP I wanted a person to be able to learn the basics of the feature before adding additional elements to it

Let the research do the talking

I made the mistake of choosing the feature I wanted to add before doing any research to figure out what feature users actually wanted. Because I went into this project with the idea already formulated, most of my time was spent on the ideating phase since the define phase was already pre-determined. I realized that it is so so important to let the research come up with the feature not me